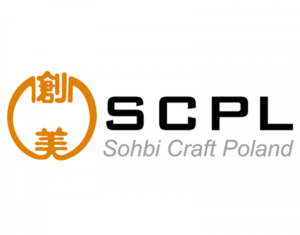 Sohbi Craft Poland is a Japanese-invested company which does not need to be introduced and which is not less successful than in the home country. Gaining the trust of a Japanese enterprise and establishing cooperation is a success of eq system. As a result, Japanese production technology met Japanese information technology supporting production management and the APS Asprova system was implemented at Sohbi Craft Poland. The effects of the implementation allow us to look to the future with optimism and to expect further, dynamic development of the company. Read what Sohbi Craft Poland has gained one year after it started implementation of the Asprova APS system.

Sohbi Craft Poland has been operating since 2006. The company’s new business is the production of FFP2 respirators but the main area of activity is the production of pressed metal components for the automotive industry. Engine brackets, steering system components, airbags, seats, air conditioning, batteries, etc. These are parts manufactured by Sohbi. Except for pressing, what they also do is threading, riveting and welding.

The company delivers these products to almost all countries in the European Union. In addition, it liaises with enterprises from Mexico and the USA. Its scale of activities is reflected in its size: currently, Sohbi employs 250 people who work in the plant with an area of 11,000 sq. m.

As a result of meetings with company representatives, eq system experts found that Sohbi wasted 1,080 minutes a day for changeovers. It turned out that an adequate and effective production plan in a situation where employees worked in a 3-shift system, 5 days a week, was a big challenge, all the more so because they wasted 60% of the time on the daily review of materials, obtaining information and preparing a production plan that was just a few days ahead. The implementation of eq system production control standard, based in this case on the APS Asprova system turned out to be the solution. The assumptions included:

The APS Asprova system uses real-time data as it has been integrated with the warehouse management system (thanks to which it always takes into account the current inventory status) as well as with the customer order system and production progress. Also, Asprova plans changeover times, production standards and schedules which includes availability of employees and other process limitations. The planner no longer wastes time on making a production plan in Excel, which it will have to modify anyway: now, the planner’s main job is to optimise the schedule and adopt new optimisation criteria. Numbers illustrate this perfectly. The APS Asprova system implemented at Sohbi Craft Poland reduced the time to collect and analyse the data by 50%. Furthermore, the plan preparation time gets shorter by 60%, and the number of changeovers by 40%.

Before the implementation of the Asprova system at the company, it was not possible to handle process improvement. Now, the time saved is spent on improving the company’s operational strategy and on decision making and analytical activities. Other tasks, according to rules and optimisation criteria, are automatically performed by Asprova.

Besides, a noticeable benefit of Asprova is the increased planning horizon: from a few days to six months. The production plan is no longer a surprise to anyone.

What else will the APS Asprova system change?

On 18-19.05.2022 we had the pleasure to participate in the Asprova Partners Meeting. 10 partner companies met in Pilsen. During the

The University of Oulu teaches, researches and develops with systems supplied by eq system and Asprova!

The University of Oulu and eq system scandinavia are intensifying their cooperation. For two years, the University has been pushing for

XPRIMER.PAYROLL – new personnel and payroll module in the XPRIMER platform

During the conference “XPRIMER 5.1. new functionalities supporting the digitalization of your company in the field of production and HR” a

Previous
Next
I recommend eq system to everyone who is lookig for a reliable and honest business partner
Michał PiotrowskiIT Director, Kuehne + Nagel
eq system specialists have many years of experience, which could be seen at every stage of the project.
Jaroslaw BorzyńHR manager Multikino S.A.
eq system specialists solved our problems, which we had been unable to cope with for several years - not because we did not have the proper knowledge, but because we lacked the right tools.
Tomasz WiącekLean Manufacturing Manager, Huf Polska Sp. z o.o.

Define your needs – we will do the rest.